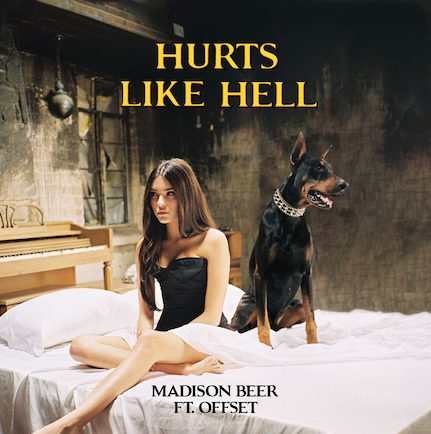 Co-written by Charli XCX and Madison, featuring Migos’ Offset, “Hurts Like Hell’’ provides fans a glimpse of what’s to come from Beer’s debut album due for release in 2019.

On the new single Madison explains, “The song’s production feels really new to me — it’s got a vibe in the beat like I haven’t heard before. I love Charli XCX, so getting to work with her was really inspiring. Offset felt like the perfect fit for the track. He’s one of the most talented, professional, down to Earth artists I’ve ever worked with, and his verse absolutely kills it.”

“Hurts Like Hell” comes hot on the heels of the success of Madison’s previous single “Home With You”, which made music history when it peaked within the Top 20 of US Top 40 radio chart, making Beer the first independent female solo artist to ever do so.

Madison Beer is an independent artist breaking in a major way. Her debut EP, “As She Pleases” (which spawned “Home With You”, “Say It To My Face” and “Dead”), has notched up over 400 million combined streams since its release in February. Her Spring/ Summer 2018 headline worldwide tour sold out within minutes of going on sale, while her first ever festival performance at Lollapalooza over the summer was lauded by critics.

This year has also seen Madison make her late-night debut on The Late Late Show With James Corden; feature in Billboard’s coveted “21 Under 21” list of top musicians in 2018; guest on David Guetta’s “7”album; perform alongside Liam Gallagher at Milan fashion Week A/W 2018; grace the covers of numerous magazines worldwide (including, most recently, Flaunt magazine); launch her own clothing collection (with leading online womenswear retailer missguided); and be enlisted as the face of a Bulgari fragrance campaign. All in addition performing live to an audience of 80 million viewers at the Riot Games World Championships Event last week in celebration of her feature on K/DA’s debut track “POP/STARS” which has topped iTunes charts in over 16 territories worldwide within 72 hours.

Madison Beer – who has partnered with First Access Entertainment and is distributed through AWAL – is a fully independent artist consistently praised for her trailblazing efforts and her passion for creating music that empowers listeners. Her huge, engaged and ever growing fanbase, (evident from her 2.6 million+ followers on Twitter, and eye-popping 10. 5 million+ on Instagram), regard her as a pioneer of the ‘Girl Boss’ generation.

All eyes are on Madison as fans look to her first full length studio debut, set for release in 2019.