A Great Big World x Christina Aguilera "Fall On Me" 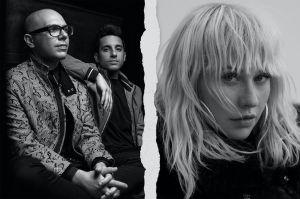 “Fall On Me” is the long-anticipated follow up to “Say Something”, A Great Big World x Christina Aguilera’s first Grammy-winning collaboration in 2013, which became an international hit with over 1 billion streams and over 10 million copies sold worldwide. It topped the singles charts in Australia, Belgium, and Canada, while peaking Top 10 in the US, UK, Austria, Norway, and Sweden.

“Fall On Me” will have its worldwide TV debut on The American Music Awards on November 24th where both artists will perform the song together in its entirety.  The show is broadcast in more than 160 countries and reaches about 7 million in the US alone.

Both artists are actively teasing and promoting the song across their socials (over 50 million combined!). A lyric video will be available around release, with an official music video to follow.  Top 40 radio in the US will be serviced on release.

A Great Big World is a Grammy-winning American pop duo from New York made up of singer/songwriters Ian Axel and Chad King. The group is best known for their singles "Say Something and "This Is the New Year", which was featured on the popular TV show Glee and reached the Billboard Top 40 chart.  Christina Aguilera is a six-time Grammy winner and one of the biggest selling artists in history with over 75 million records sold.